My career as a motorcyclist began not as a rider, but as a passenger - a somewhat unsure passenger at that.

A group trip from Logan, UT to Sawtooth National Recreation Area, Idaho. My car in the shop.
Me: "Hey can I have a ride with you?"
Future Moto Mentor: "Yes, I'm taking my motorcycle!"
Me: "uhhhh..."
End result: I was hooked within the first few miles, and very disappointed when we arrived at our destination a few hundred miles later. ("When do we get to get back on the moto?") For the rest of the summer, I got on that BMW K1200RS every chance I got.

Here I am, upon arrival, in my not-so-glamorous, ill-fitting loaner safety gear. I was crazy happy. 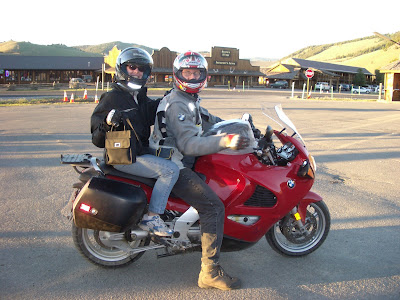 Tragically, summer ended. I went back to AZ, the "Super-K" went to TX.
My only option? Get my own bike. The rest is history.

Even though I have my two-wheeled machine now, riding as a passenger (or "pillion," if you want to use moto-lingo), has not lost its appeal. For me, they are two distinctly separate and equally enjoyable activities. I've toured Texas Hill Country on a number of occasions now, always from the back seat. Here are my (our!) findings.

In the summer of 2008, with its record gas prices and airfares, vacationing locally (or at least closer to home than, say, Europe) became pretty hip. The New York Times featured the area in an article "31 Places to Go" and I think they described it pretty well. I'll use their words, and hope that I'm not breaking any laws.

Who needs Europe? The Texas Hill Country, west of Austin and north of San Antonio, might be the next best thing to crossing the Atlantic. The region is lush, colorful and, unlike much of the pancake-flat state, dotted with beautiful green hills that are evocative of Tuscany or the south of France. Moreover, the region is speckled with 22 wineries that buzz with food and music festivals year round. And towns like Fredericksburg offer a taste of the Old World, with German-style biergartens and schnitzelhäuser.


Beautiful hills quickly translate in any rider's (or pillion's) mind to "twisty fun moto roads!" And, indeed they are there; "the 300's", specifically routes 335, 336, and 337 are particularly beloved.
If rolling hills dotted with live oaks are not enough for you, there are plenty of other things to see and do in the area. The Lost Maples State Natural Area, in Vanderpool, "features a large, isolated stand of uncommon Uvalde Bigtooth Maple." On one of my visits, we enjoyed a fantastic foliage display. 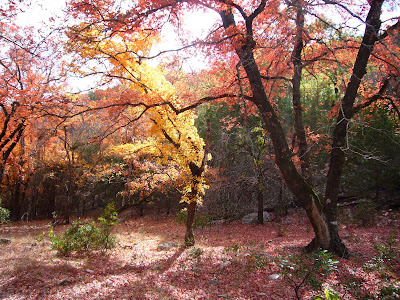 Here's an oddity you don't see everywhere - replicas of Stonehenge and Easter Island, in Hunt, TX. 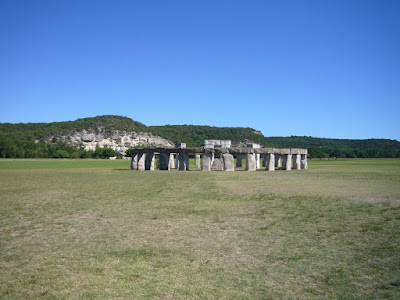 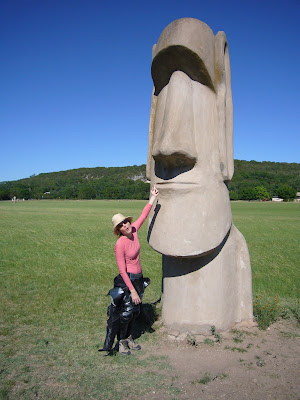 I've noticed what seems to be an usually large number of goats in the fields and pastures in the area. But I'm disappointed when I look for goat cheese and/or goat meat. I wonder what they use all those goats for. And here, roaming the hills - Yes! Giraffes! Kangaroos! (I love the little roo in the left background, caught in mid hop.) 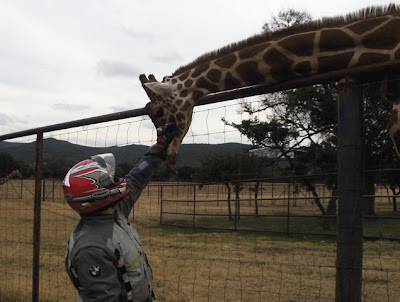 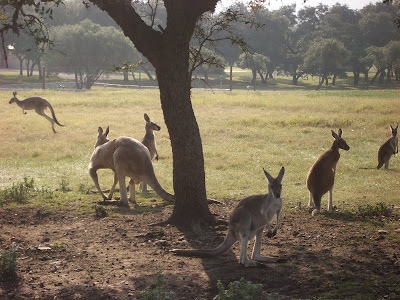 It's easy to spend hours and cover hundreds of miles looping around the area, riding the most exciting stretches over and over... back and forth, back and forth until...

... you get hungry! And when that happens, there is no shortage of places to eat. Two of my favorites are the Ace Cafe at the Lone Star Motorcycle Museum, in Vanderpool, and Cooper's Barbecue, in Llano. The Ace Cafe has delicious and innovative burgers, as well as a fleet of interesting antique motorcycles. You can see me in that same borrowed jacket. This was in the early days, before I had my own bike. I was passing through the area on my way to/from a Hurricane Katrina diasater response, right after the summer I learned that I loved motorcycles! Soon, very soon, I would have my own motorcycle AND jacket. 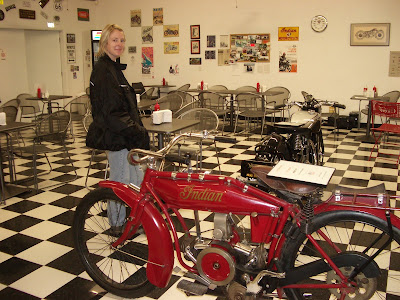 Cooper's Barbecue sells its grub by the pound. It's not elegant, but it's amazingly tasty!

Fredericksburg has a German slant, and at the Altdorf Biergarten you can get a fine selection of sausages. Having had sausages in Munich, I can say that they are the real deal! 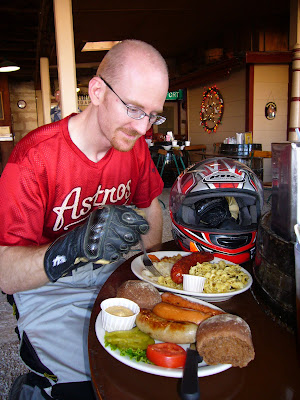 If you prefer, you can have a THREE pound burger at Lord's Kitchen, in San Antonio. (One pound burger shown here.) 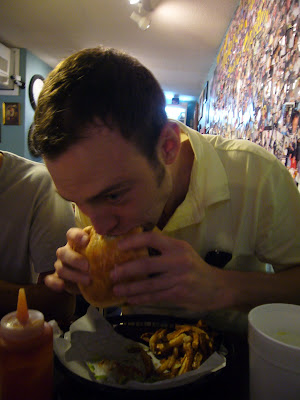 Or how about a bubbling cauldron (the Molcajete Special) at El Jalisco Grill, also in San Antonio, for a whopping $5.95, including chips? (I couldn't stop myself from taking an actual movie of the thing.)


There's still plenty left for me to explore in Texas Hill Country. The area is famous for its wildflower display in the spring, and I would love to ride the Bluebonnet Trail one day. And although I've ridden by the Grey Moss Inn many times, I've yet to stop and eat there. Doesn't Roasted Texas Quail sound good? Plus, I haven't even begun to explore all the wineries in the area. One of the benefits of being a passenger is being able to have a bit of wine with your meals!

Here's a movie of a Texas adventure of a different sort. It has nothing to do with riding or eating, but it was a life dream, realized. (It looks a bit funny here on this blog until the movie starts playing, since the first few seconds are just a black screen.)
Many thanks to Diek for putting this movie together for me.