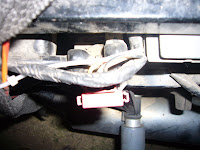 Back in the innocent days when I actually thought I'd be riding to the Black Mesa Ranch and Goat Cheese Dairy, I though it unfortunate that our CSA "field trip" to Josh's Foraging Fowl fell on the same weekend. But the ride to Josh's Foraging Fowl is far from exciting, whereas the ride to Black Mesa is all one could ask for and more, so the choice was clear. Plus, the trip to Josh's would be easier to schedule later. Well, you may remember that my little trip to northern Arizona did not work out as planned. If you missed that exciting story, see here and here.

It pained me greatly to set out in the car to Josh's, but I managed. It helped a teeny tiny bit that the route is not very exciting. I wasn't missing too much in the way thrilling riding. Still, it hurt.

While you might see the term "free range" quite often in the grocery store, it's not quite what you think it is. Often, it means that the birds have access to the outdoors for a portion of their bizarrely accelerated lives. But there is no mention of what this "outdoor" environment is, nor the fact that the birds, having lived their first few weeks locked up in a warehouse, are often unconditioned to the outdoors and do not exercise their so called free range privilege. Josh's birds live in real pastures, scratch and forage naturally, and, for this reason give eggs that are incomparable to any egg you might buy in a grocery despite an organic and/or free range label. The birds themselves are pretty dang tasty, too, and have become "special occasion" fare in my household. Three cheers for Josh, who brings us not just chicken, eggs, and turkey, but grass fed beef as well.

I resist the temptation to put up too many pictures of fowl, but I can't help but share this one movie clip of our future Thanksgiving dinners storming the alfalfa field. Funny, they sound like barking dogs. And, unlike chickens, they rush towards you when you approach them, rather than scatter away.

Even if I had immediately diagnosed the problem with my motorcycle (which I decidedly did not), I still would not have made it to Black Mesa Ranch. As it turned out, I needed a solonoid valve, or, as Kawasaki cleverly disguises it in their parts diagrams, the "magnetic switch." The part was not in stock anywhere in Tucson. I did happen to learn that it was in stock in San Antonio, however, and still in the "I'm doing whatever I want this weekend, because I'm so sad I missed my trip" mode, and airfare being low, I decided it prudent to fly there to pick it up and settle for being a motorcycle passenger. I saved so much money not having the part shipped to me! While collecting my magnetic switch at the shop, I had to the good fortune to meet "Clutch" the Chihuahua pup. 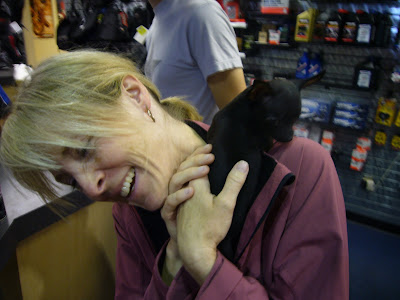 One must have Barbecue whilst in Texas. Here's the spread at the Coopers' Barbecue I've written about before, this time the New Braufels location.

No trip to New Braunfels would be complete without a visit to the Snake Farm. (???) Here, in addition to viewing any number of exotic snakes (why?), you can:

watch large numbers of crocodiles rush the guy feeding them (the alligators are much more polite),

(movie clip too big to load, use your imagination) 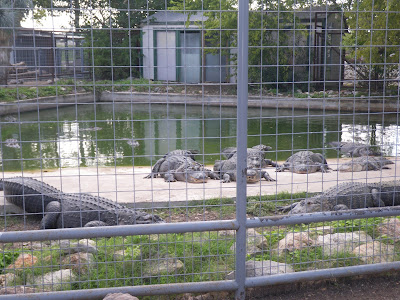 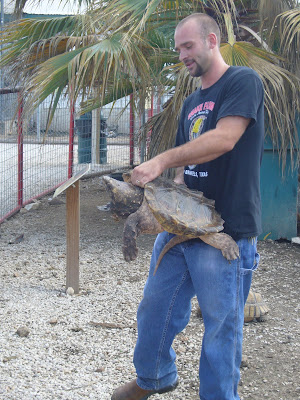 and, of course, pet goats! So I did get my goat fix, after all. 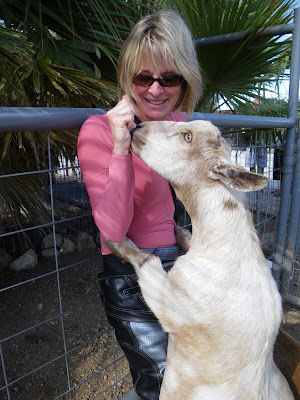