When in Rome, Grab a Paddle

One more month to go on my Flatistan Tour of Duty.  I’m going a little crazy. I miss my mountains and motorcycles.  Last week, on my day off, I threw myself onto the bed in a dramatic manner unsurpassed by any 13 year old.  I’m boooooored!  There’s nothing to dooooo here!!!  Pilot Guy suggested my sulking would be more effective if I locked my bedroom door and spent the afternoon drawing unicorns with a sparkly pen in a pink and purple spiral notebook.  “Add a rainbow or two,” he suggested.  It didn’t help.

I really, really need a Florida Friendly Activity.  So yesterday, in an emergency procedure,  I bought an inexpensive “recreational kayak.”


Today I took her for her maiden circumnavigation around my parents’ neighborhood.

I noticed a funny thing while paddling around this winding watery racetrack.  When the going got tough (read: headwind),  I unconsciously defaulted to the cornering lines I know best. So far, I corner significantly better on the Ducati than in the kayak.

Otters, herons, ospreys, ibis, anhingas, a duck with a dozen just-in-time-for-Easter ducklings... all sorts of things to see! 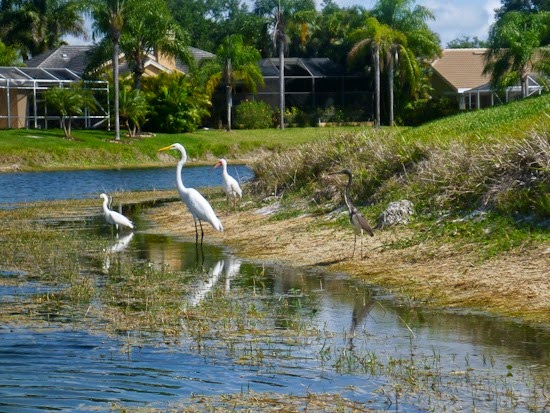 There were some notable comestibles as well.  Plenty of coconuts lined the shore, which prompted me to add "hacksaw and/or hammer?" to my kayak adventure pack list. A few of them had the surprising habit of getting up, walking a few feet, and plopping into the water, at which time I reclassified them as turtles.  And there are some ducks that for all the world look like Barbary ducks, origin of magret, that succulent like-filet-mignon-but-better red meat (yes, red!) duck breast capped with a golden crust of mouthwatering, crispy, fatty skin... oh my!  I could not convince even one of those ducks on board.

But if I ever do, my kayak has little hatch in which to store my magret picnic lunch.


Next up, the 99 miles of Wilderness Waterway in Everglades National Park?

For all you Ducati people out there, I call her “The Des-NO*.”  Get it?  I crack myself up.

*For you non-Ducati people out there, Ducatis are known for their proprietary “desmodromic” aka “desmo” valve operating system.  Get it now?  Desmo?  Des-NO? Yeah, I’m that clever.

Email ThisBlogThis!Share to TwitterShare to FacebookShare to Pinterest
Posted by Eating On Two Wheels at 10:32 AM Labels: Florida

The coolest place to go with a kayak is the mangrove swamp. Ya know those little "hermit crabs" you see for sale in the pet shops (where I came from, they always lived in the sand at the beach)....well, in the mangrove forest, they live UP IN THE TREES ! So, there you are, paddling along, and you happen to look up, and the trees are ALIVE !!!!

I did go through a little mangrove trail the on my "trial rental day," but opted for the open water photo. Very creepy. Did not think to look for snails overhead, but I can tell you, I'm not looking forward to my first alligator sighting.

What the heck- adding the mangrove photo to this post.

Ha Ha....I think the mangrove forest is one of the coolest places ever! One of the times I was there (the one on Sanibel Island), a couple of foreign tourists somehow swamped their canoe, so they ended up in the water, and were terrified (of alligators, I'm sure). We helped them empty it and get back in, all from the comfort of our kayaks, of course; as much as I like it there, I'm not real keen on actually walking in the water.....

My open style kayak ("sit on top" they call it) is self bailing, which may come in handy one day. That being said, I think for fun, if nothing else, I'm going to throw it in my parents' pool and practice a few "self rescues." (I won't be intentionally practicing that maneuver in any alligator water, thank you very much!)