And now, back to our regularly scheduled program. (Farewell, Utah!)

Okay, enough of contests and scrappy back yards. Back to the business at hand - riding and eating. Or is that eating and riding? All good things (well, most of them) must come to an end, and I did eventually have to leave Utah. The drive home (alas, I had to tow the moto rather than ride it - too much stuff to haul) was - take a guess - heartstoppingly beautiful. I came upon the Vermilion Cliffs/Lake Powell area at that time of day just before sunset, when the light is just, well, magical. It must be the same sort of light that inspired the great landscape painters in southern France. All the cliffs were positvely luminescent, and I found myself meditating on the salmony-corally-pinkish-reddish hues, trying to pin down just exactly WHAT those amazing colors were. (It can't be done, at least not by me.) It's an interesting exercise though, running through the palate of words in your mind and constantly coming up short. There's a certain color of grass in southern Idaho that first sparked my interest in this little game. The best I could come up with was "ever so slightly radioactive jade". Funny, I didn't stop to take pictures - not of this grass and paint by numbers green landscape in southern Idaho, nor the unbelievably saturated study on pink in southern Utah. I always regret not having the pictures, but at the time, pulling out the camera almost seems like a distraction.
After all this magical sunlight, I had to suffer through yet another extraordinary sunset. I'm going to stop saying how beautiful it all is, lest you stop believing me.

Let's talk delicious, instead. Gary, one of those wonderful people who keep the Utah Festival Opera festival running, happens to live on a small farm outside of Logan. (Where he and his wife find the time to actually run the farm, I have no idea, but it seems to be working.) Some years ago, he decided to give a party for the entire opera company. For those of you who don't know, that is a really big party. He had ribs, barbecue, deep fried turkeys, pies... you name it. But the most memorable item on the table for me were his tomatoes. Who knew the holy grail would be sitting there on a plate, with no more than salt and pepper on them, looking so innocent? I've had tomotoes like this as a child, from my grandfathers garden, but I had long ago given up finding anything like that again. Well, Gary had another party this year, and all I could think about was those tomatoes. They weren't a featured item on the table this time, but I wasn't shy, and the lady of the house handed me a stash from her kitchen counter to take away. I'm embarassed to admit that I actually sort of hid them as I left - they were that precious, and I wasn't about to give even one away. When I prepared them (yes, I did share with my roommates), I was almost nervous about eating them - would they really be as good as I remembered? They didn't disappoint. Here they are, with some basil from my front door herb garden in a pot. 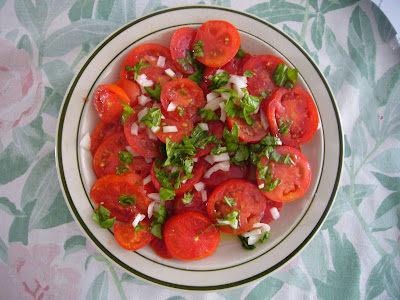 Little did I know that there were more such tomatoes in my future. In Arizona no less. Stay tuned.

My transport to this party was indeed a motorcycle, but not my own. My moto-mentor (i.e. the one who got me into this motorcycle madness), on his annual (more often if possible) cross country moto-camping trip, arrived in Utah the day before on his new KTM 990 Adventure. It's the three dimensional moto! Big and comfy enough for the long haul, fast and sporty for fun, and (this is the new part for him), highly capable off-road. What's not to like? You can read about his adventures here. 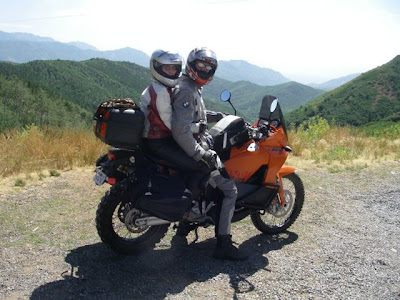 And so, with the taste of tomatoes still lingering and more than a bit of sadness, I bid farewell to Utah until June 2009. But, ahhh... Arizona! I've yet to share my adventures on what may be the grand-daddy of all Glorious Motorcycle Roads - AZ 191...

Email ThisBlogThis!Share to TwitterShare to FacebookShare to Pinterest
Posted by Paula at 4:07 PM Labels: motorcycles