In California! (On a Kawasaki)

So, yeah, my last blog post? That was me sitting on my bike, holding one of the offending bolts. And the background? We're not in Tucson anymore. (Not everyone caught all the significant points of that photo.)

Yes, I made it to California! San Diego, to be specific. Not the extended trip I had originally planned, and not on my Ducati, but... Kawasaki, meet the Pacific Ocean!

I arrived a bit ahead of schedule, so while awaiting my good friend and host, soprano extraordinaire Stephanie Sabin, I enjoyed a turkey pesto panini, espresso, and tasty macaroon at Twiggs Bakery and Coffeehouse. It felt good to kick back after a 465 mile ride!

The next morning I took on the role of pillion, or motorcycle passenger, something I enjoy almost as much as doing the driving myself. My Most Excellent Tour Guide (or METG, as I shall now refer to him) was none other than the Ducati Instigator himself, guilty of alerting me to the availability of Ducati Monsters on Craig's List. He picked me up bright and early on his... his... Honda Goldwing! This is a different beast than any bike I had ever been on before, and, to use his own words, is sometimes referred to as a "geriatric" model. This is a seriously big bike, and as comfy and luxurious as they get. A couch on wheels! (Actually, it's safe to say it's quite a bit larger than my couch.) Here's the thing neither of us expected: I, uhhh.... don't know how to get on the thing! It's so big that I can't do the "swing the leg over the back" maneuver. I never did find a good way to do it, much to my pilot's (and my!) embarrassment. I think the running start was my best attempt. But once in my seat, I felt like Queen Cleopatra floating down the Nile. And despite its "geriatric" label, it had more "get up and go" than I would have guessed. I know all you sport bikers are guffawing, and I suppose I would be too, but I did indeed have a surprisingly fine time aboard this well appointed machine. Any ride with two wheels is a good ride!

We grabbed some coffee and crepes at Babbo Grande (what's up with their goofy seating restriction at 7 am? They're not THAT good.) and hit the road.

First stop, Julian, CA, just in time for its annual "Apple Days." The pie wasn't pretty, but it sure tasted fine! 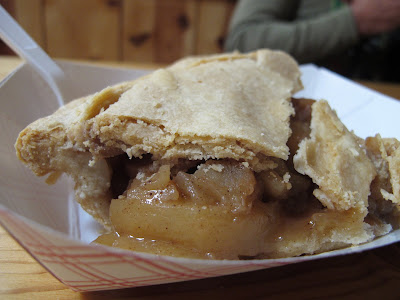 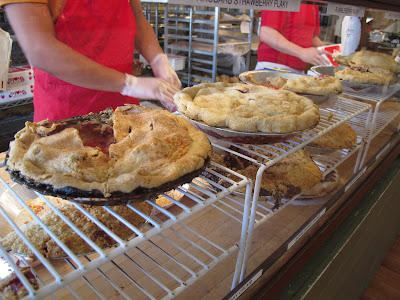 Next stop, Henshaw Lake and Palomar Mountain. The Goldwing performed admirably, but roads that twisty call out for my Ducati. I admit I found myself missing it. No surprise there, my METG warned me I would.
I snapped this one from the back of the (moving) bike. Not bad! 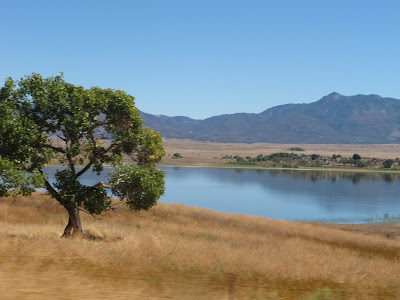 Then on to Callaway Vineyards and Winery, where my METG is a member. Nice perk! I got to taste five wines followed by a port with an accompanying bite chocolate. My votes went to their "Dolcetta" and red Zinfandel. (Let me just point out here that six tastes are the equivalent of one glass of wine, and we were there several hours... you do the math. We were fine.) 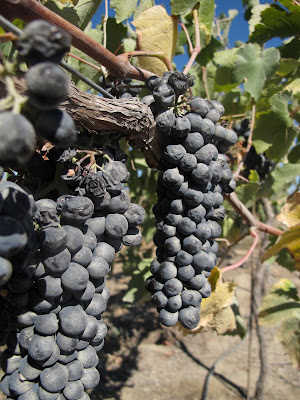 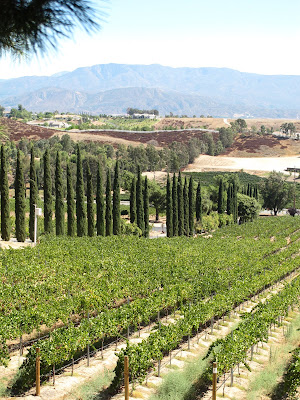 And then over the Ortega Highway to Laguna Beach for a little picnic snack. (Sunset not shown.) 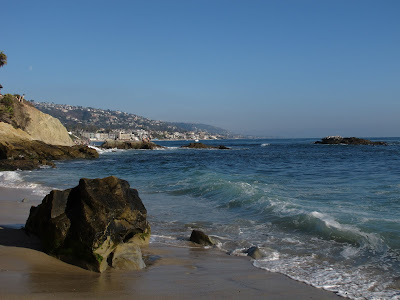 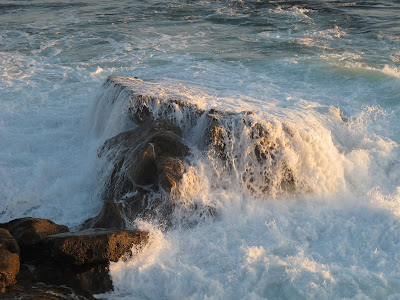 All and all a lovely day!


The next morning, Stephanie, her parents and I had breakfast at the aforementioned Twiggs, (Oh the choices - these people can seriously bake!) and then hit the Hillcrest Farmers Market. She had an agenda and schedule, and I was tripping gaily behind her, snapping photos, trying not to hold her up too long. 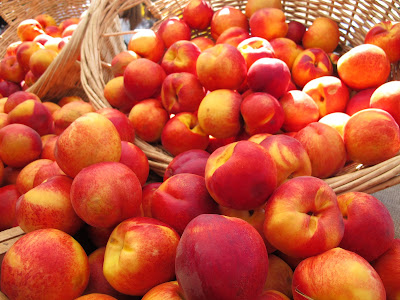 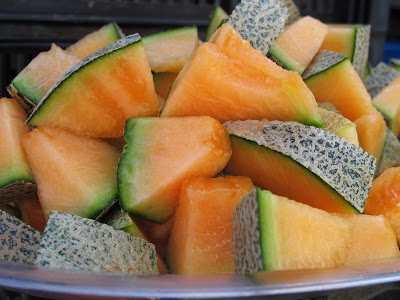 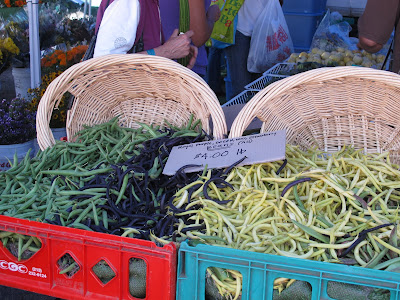 Quiz: What are these? 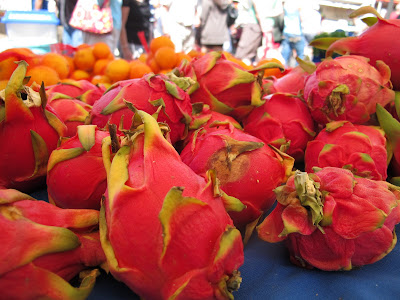 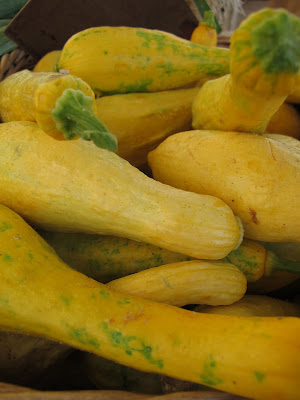 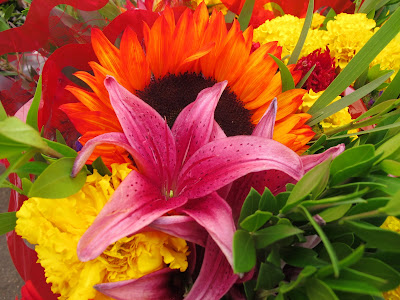 Then on to the Mission Bay area, to document the bike, the bolt, the water... 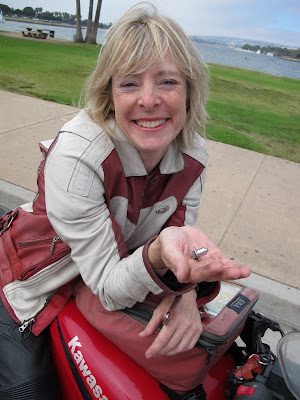 and La Jolla, too. 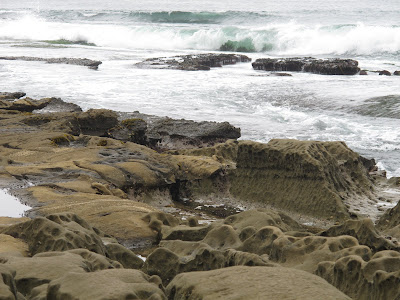 Next to St. Paul's Cathedral, to hear Stephanie sing her cleverly conceived concert, "Plaisir d'Amour." She'll be singing it again this spring... in Paris!

And finally, excellent Carnitas Tacos with Chipotle Black Beans at the after concert celebration of "Mexican Soul Food" at Barrio Star, courtesy of Stephanie's generous parents. 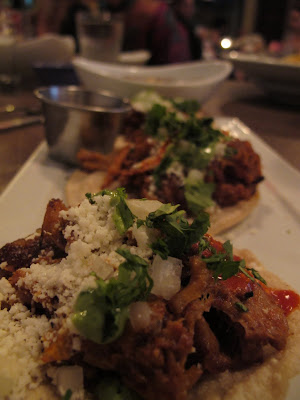 The following morning, the long ride home. How do you suppose the Kawasaki will fare? (Yes, that's a hint that this story isn't quite over...)