Remember when I said my Kawasaki needed a bit of maintenance? To tell the truth, its rear tire was totally bald, it was about 10,000 miles past due for a valve clearance adjustment and carburetor synchronization (and is running like it), I'm sure it needs a new chain and sprocket, is also overdue for a fork oil change and could use a new neutral safety switch.

I'm not a mechanic. I don't want to be a mechanic. But my budget demands that I do this work myself whether I want to or not. So... I promised my trusty Kawi that if it got me home safely from the Grand Canyon (and I would not have blamed it if it hadn't) I would drag out the tools and get to work before riding it again. (Hopefully to CA! For a different trip. Later this month.)

Based on its symptoms, I though I'd start with the valve clearance adjustment (so easy, I'm told, even I can do it!) and carb sync, get a new tire, and finally replace that turn signal that's been repaired with packing tape for over a year. If THAT went well, maybe... MAYBE... I'll be brave enough for the chain (and neutral safety switch, while I'm in the neighborhood). I'm not sure about the forks.

Hurrah for the internet, where I find detailed instructions for the valve clearance adjustment! With pictures, even! I've never done this before and it sounds scary, as much as I'm told that if I've taken apart my carburetor (many times, thank you) then this will be a piece of cake.

Anyway... it's not important if you don't understand what I'm talking about. And if you do, well, don't laugh at me too hard, okay?

So off I go, with a stack of references in one hand and toolbox in the other to dive into the valve clearance adjustment. Shockingly, amazingly... this IS easy. I am so proud and I can not wait to announce to the EX500 online community that for ONCE, I have done some work on my bike without even a single panicked SOS posting. But before I button her up completely, I figure I might as well put the wheel (with new tire) back on, clean the chain, mess with the turn signal, knowing that if something DOES go wrong when I start her up, those other chores will already be checked off the list.

Yay! It's time to close up the patient and wake her up! Just a few bolts to tighten and...

This is not a good sound, friends. 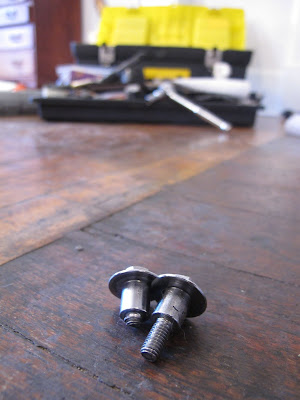 See the bolt on the left? It's supposed to look like the one on the right. I bet you're wondering where the rest of it is. Why, it's lodged in the engine of my motorcycle! Irretrievably so, it seems. This is a grave error, people. You may not have broken off bolts (THREE of them!) in your beloved motorcycle before, but I bet you're familiar with the sickening feeling that I had. Ever had your computer crash, when you haven't backed up for, say, six months, and you fear all your photographs, work documents, banking records, emails, whatever data that is important to you are lost, lost, lost forevermore? All the while knowing you have only yourself to blame? THAT is how I felt. Because I broke them doing something stupid. By using the wrong tool to put them back. What's more, I KNEW I was doing something stupid WHEN I was doing it, but, for whatever reason, proceeded to do it anyway. Actually, I did have a (faulty) line of reasoning for this at the time, but I'm too embarrassed to explain.

Snap. Snap. Snap. That's the sound of another chance to ride California going down the drain. That's the sound of one very panicked post going up on EX-500.com. I'm going to have to extract these things aren't I? I'm guessing that much, and I know it requires a drill. Now, I'm not afraid of power tools per se, but putting one on the innards of the engine of my motorcycle is NOT something I want to do. One slip, one shard in the engine... you're done fer.

What am I eating while working on my bike? Smoothies. Throw some OJ concentrate, ice cubes, yogurt, wheat germ, apricots (canned in UT!) in the blender, hit the button with the tip of your elbow (the only part of you not covered in grease) and slurp.

Email ThisBlogThis!Share to TwitterShare to FacebookShare to Pinterest
Posted by Paula at 8:33 PM Labels: breakdowns and repairs, Kawasaki, motorcycles, recipe

Oy, so sorry. Snapped bolts are a bad deal where ever they turn up. Never remember reading about snapped bolts in "Zen and the Art of Motorcycle Maintenance."

Sure you don't want some rum to go with those smoothies?

The rum sounds tempting, but I don't think it will do much for my mechanical batting average. I'll save it for after my victory "Yay, it goes!" ride.

I have this really neat set of tools for dealing with this. They are called drill outs and it is a all in one tool for removing broken bolts. They have a reverse drill bit built into them. Most of the time the drill part will grab and turn it out. IF it does not then you tighten the collar and then use a wrench to twist it out. I got my set of 4 for 20 dollars some years ago. When my 3/8-10mm broke off I sent a email through the web site. Get a reply the next day, Sent a shipping address to him and had a replacement the next week. It is a great product and great support.
http://aldn.com/Pages/drillOut.php

Thanks for the tip, Denis! I'm grateful I didn't have to go to these lengths this time around, but I'm sure it's not the last...