The Twelve Days of Christmas

Well would you look who the cat dragged in? My touring partner of years past landed some work here in Tucson.  I learned to love motorcycles from the back seat of his two-wheeled BMW (since replaced by a KTM 990), and although I have my own bike now, you already know that I still enjoy being a passenger from time to time.  Even so, it's been a number of years since we've been on a proper tour together.   The timing could not have been better, since for the first time ever, I was staying home for the entirety of my Christmas break.  I just spent any money I would have used to fly back east on a monumental shopping spree.  Turns out, I was going to put my newly acquired motorcycle jacket and cold weather gear to use sooner rather than later.  We decided a tour was in order, after our work for the year was complete and, once again, it was unseasonably cold weather.  Not without some doubts, I decided to retake my role as pillion (passenger) and leave the Ducati at home.  It seemed like a good time to get its nagging little oil leak looked at, plus the days are short in December and you know I can't ride after dark.  In addition, the KTM's pilot put some real street wheels and tires on his machine (it's a dual-sport bike, meaning it's designed for both on and off road riding), and was eager to convince me that his KTM would be just as fun on the street as his BMW had been.  I am a very discriminating sport-touring passenger and to date, I've been less than awed by the KTM's value to this particular pillion in regards to the sporting end of sport touring.   I must be fair and add that it is, without question, a great motorcycle for its particular owner.

Our goal was Death Valley National Park.  And though it's known for its extreme heat, it can get plenty cold there, too.  We needed to be prepared for subfreezing temperatures (good thing I just bought that EN tested zero degree sleeping bag, huh?).  Less common is rain.  Surprise!  All of southern California, including Death Valley, was under water, thanks to rains that were severe enough to make national news.  I'll ride in the rain if need be, but it seems silly to point yourself in the direction of bad weather on purpose.  Our strategy?  Go east (the only dry direction) until the bad weather reached us there, then go west!   Chiricahua National Monument, here we come!

We found ourselves at the lovely Massai Point for the simultaneous astronomical trifecta of a complete lunar eclipse and the Ursid meteor shower, both occurring on the  the winter solstice.  How many people can say that?  I'll tell you.  Two.


Oh celestial enchantment!  Silvery, shimmery, liquid moonlight gently spooned by angels over earth, trees and rocks, over motorcycle tires, faces, and yes, even my heart - crisper and sweeter than a caramel coating, softer and dreamier than any meringue found here on our humble earth.  Now, a dark chocolate shadow melting across the moon, unstoppable, dimming its sugary light - do not despair!  Stars appear, ever more numerous, twinkling salt crystals on the tongue,  gasp!, chile pepper hot! - one obliges to streak across the sky.


Despite all the wonderful experiences I have shared with you, the year 2010 was a painful one on so many fronts.  I'll take this lifetime event in the sky as a convenient sign that 2011 will be better.  Why not?

We watched the entire show in the sky, and took a little nighttime photography, too.  I like to use my own photos on my blog, but when one of you has a digi point and shoot (my Canon G11 is nice and little more complicated than that, but...) and the other an expensive dSLR (Canon EOS 7D), and there is only one tri-pod between the two of you, guess which camera gets priority?  I can at least say some of the photos were to a certain extent, a joint effort.  "What if you shine the light more here, instead of there?  What if you change this setting to that?"  And so on. 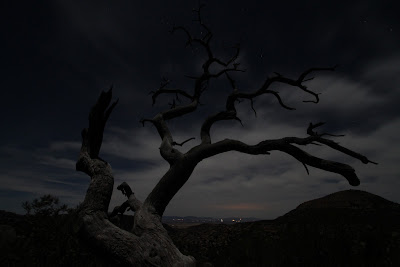 The next day, a hike amongst the "hoodoos." 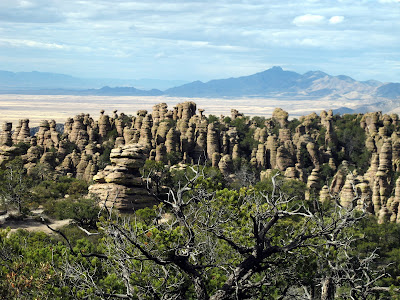 The the plan for the evening?  Ride to Bisbee, AZ (it's only 50 or so miles, right?) and check out Cafe Roka (about which I've been curious.)  Note to self:  it's more like 90 miles each way,  and Cafe Roka (along with practically every thing else in Bisbee) is closed on Tuesday nights.  The burger at Bisbee Grill was fine, I guess (most burgers are, especially when you're as hungry as I was), but not particularly notable.  The ride back to Bonita Canyon Campground was... cold.  Incidentally, if you find yourself really, really cold and you think absolutely nothing will warm you up, you can always push a 600lb motorcycle around a parking lot while wearing your awkward riding gear.  It's surprisingly effective, even for me.  We resorted to this tactic more than once over the week.

By the next day, we knew the aforementioned weather was approaching, so it was time to head west, via one night at home in Tucson.  But first, some playtime on the Mount Graham Swift Trail Parkway and a surprise drop dead run for your camera sunset like I've never seen in my life (as if the sky didn't serve up a five course dinner the previous evening).  We didn't quite get to the cameras in time, but other than that, our timing for the day was good.   The road up Mount Graham is closed in winter, and we may have been the very last up there for the season.  Not only was it the first official day of winter, but just as we reached the bottom, it started to rain just a bit.  No doubt that rain was snow higher up.
And how did the KTM fare in my estimation?  It earned a star, but...  Well, like I said, I'm very discriminating.   More on stars later.